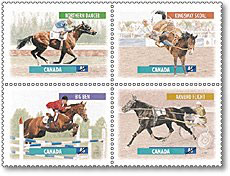 The cowboy getting bucked off on the saddle bronc image used for the stamp was CFR qualifier, Ian Freeman.